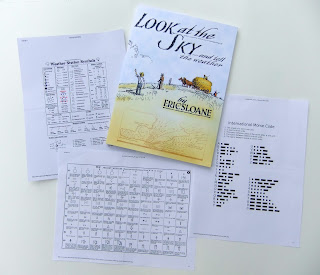 During a workshop with Susan Feller at the Green Mountain Rug School in Montpelier, Vermont, I started to design a new textile piece. Inspired by the Weather Network's storm watches and warnings of the day, I began to collect weather references such as symbols used by meteorologists, cloud photos, morse code, poems by Mary Oliver and a wonderful illustrated book by Eric Sloane called "Look at the Sky and Tell the Weather". 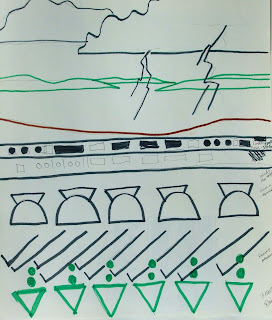 Once some of the material was gathered, I began by making some quick thumbnail sketches to work through my initial ideas and to play with symbols. I have always loved the drama of thunderstorms and quickly decided that I needed some cumulonimbus  clouds as well as some dramatic elements. Did I mention that I am a member of the Cloud Appreciation Society? 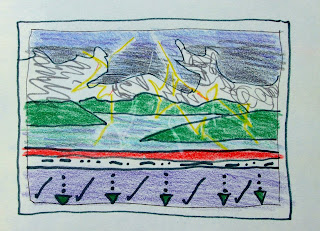 As I worked with the drawing materials, I began to combine the symbols related to meteorology with the dots and dashes of morse code. 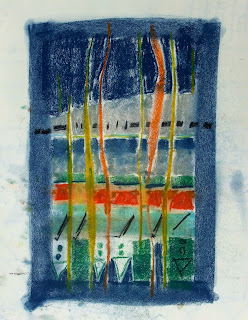 I moved on to working with pastel on a large scale and really started to enjoy myself! 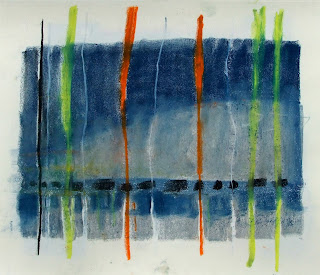 I finally added some lines to suggest lightning and interference. Those all got me to remember my father who also loved thunderstorms. We used to call each other to say "On va n'avoir une maudite!" which was our code for "Watch out, we're going to have a big storm!"
This is where I stopped with the drawing and preparation for this hooked piece. I chose to work with wool in a traditional rug hooking technique using a fairly fine cut of wool because I do intend to have more detail in the cloud portion which is now simply depicted using grey pastel in the drawing. 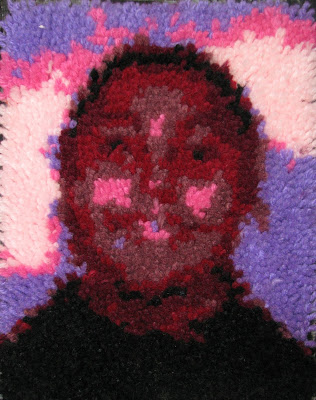 Here are some images of the latch hook selfies created by my grade 6 students this year. They started by taking photos of each other. They then uploaded their image to a website called leftsource.com. You can use this site to create gridded patterns for free. You can use up to 64 colours. I limited the colour choices to 7 but some used fewer. The website even generated a shopping list depending on the company we order our latch hooking supplies from! The rugs measure approximately 9x12 inches. We worked on them at school for a couple of classes and then worked at home. We had a monthly hookin during which I photographed progress. Students completed these over 6 months. 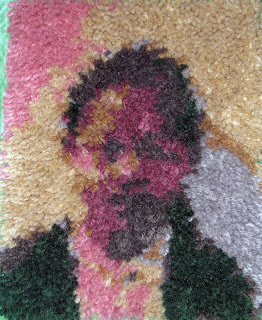 Here is our whole display of finished rugs. We had many encouraging comments about this project! 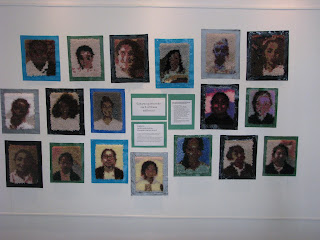 Students brainstormed this list once the project was finished:

SOME THINGS WE HAVE LEARNED BY WORKING ON A LONG-TERM PROJECT LIKE THIS:

·      To not procrastinate.
·      That listening to music helps with concentration for this kind of project.
·      That practice improves skill.
·      To work on the project regularly otherwise you might forget how to do it.
·      To follow our instructions/chart carefully.
·      That working with wool is a calming activity.
·      Working from the bottom up was easier because the ends weren’t in the way.
·      Working on this project can help deal with sadness, stress and other emotions.
·      That it takes a lot of patience to finish something like this.
·      That being impatient can lead to making mistakes.


·      That leaving things until the last minute is stressful. It also leaves no time to correct,   or to get more materials...
Posted by Kathleen Menzies No comments: 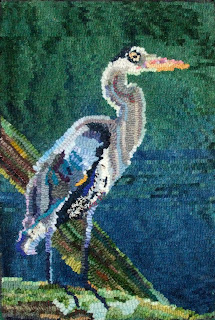 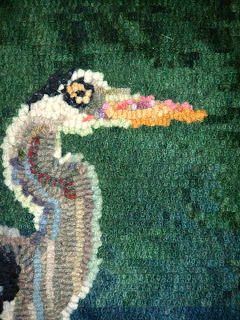 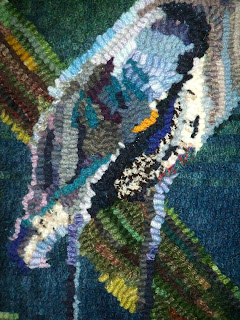 This is a rug I was inspired to make after a Green Mountains Hooked Rugs workshop with Jon Ciemiewicz. During his classes with us, Jon shared slideshows of his work, inspiring images, some riddles and prizes. He also covered several of his methods for dyeing wool using one single slow cooker! I have since used many of his ideas when hooking and dyeing. Thanks Jon!
The heron and the tree were hooked with many bits of wool hiding in my bag of "noodles". I dyed the water and background of trees using one single piece of Dorr wool. I measured how long my horizontal strips needed to be in order to hook a full line. I then measured a piece of wool that wide and as tall as the background. Using various values and tints of blue and green dye, I "painted" the background wool as one piece in a large metal casserole dish. In order to keep the painted strips in order, I cut 4 of them at a time horizontally as I hooked and taped the pieces together with masking tape until I was ready to use them. 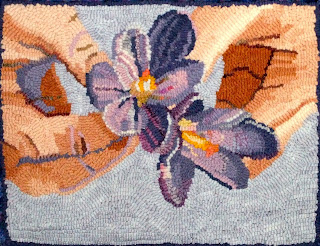 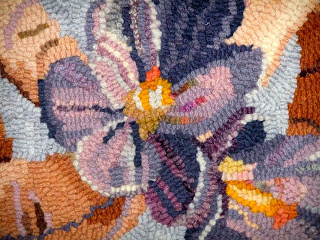 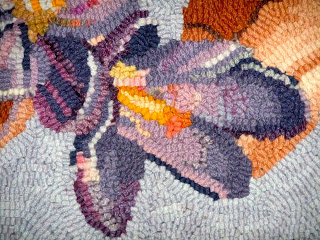 I designed and hooked this piece during a workshop with Jon Ciemiewicz at the Green Mountain rug hooking school. Although Jon's specialty is hooking animals, he didn't mind my choice of subject. I had recently heard Sarah MacLachlan's song "Ordinary Miracle", which is the theme song in  "Charlotte's Web", the week crocuses were blooming in my garden.  After a cold winter these flowers always seem miraculous when they pop through the snow.
Inspired by Jon's work, I did hook a blue heron not long after.

Waiting for the Storm 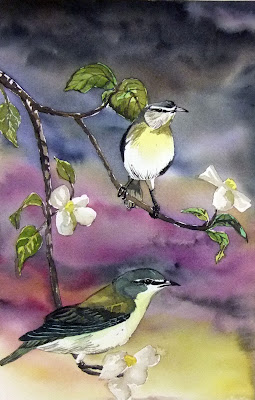 Watercolour is somewhat unpredictable. It can be lots of fun to put down a lot of water on the paper, leaving some forms dry (as was the case here for the birds and branches), and dropping selected colours freely to let them wander and blend. It sometimes doesn't work out but I liked this sky a lot!
Posted by Kathleen Menzies No comments: 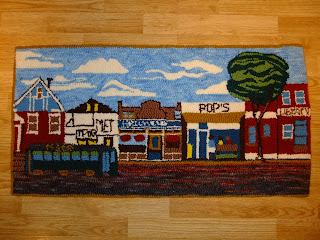 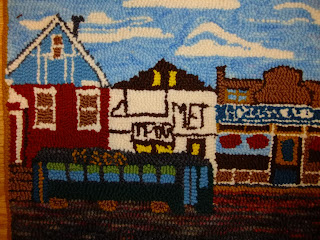 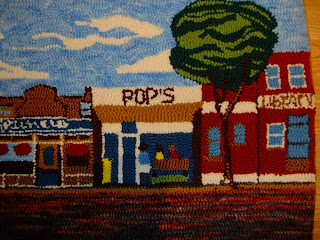 A rug I designed and punch hooked for my partner. It represents some of the buildings which have had their addresses on our main street over the past hundred years.
Posted by Kathleen Menzies No comments: 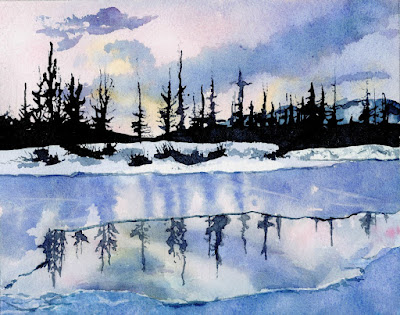 A peaceful scene of dark tree silhouettes, setting sun and reflections on melting ice.
Worked from a photo but I wish I was there!
Posted by Kathleen Menzies No comments: